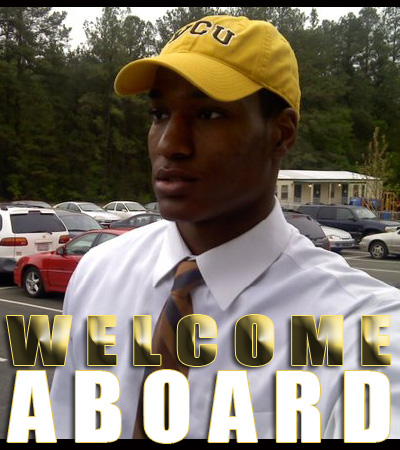 RICHMOND, Va. Ã¢â‚¬â€œ In the office of Virginia Commonwealth University MenÃ¢â‚¬â„¢s Basketball Head Coach Shaka Smart hangs a list of components that are vital to Ã¢â‚¬Å“wreaking HAVOCÃ¢â‚¬Â on the opposition.

Ã¢â‚¬Å“We are extremely excited about the five student-athletes that will be joining our program,Ã¢â‚¬Â Smart said. Ã¢â‚¬Å“As a group, they will add a high level of athleticism, length and competitiveness. All five will fit very nicely into our HAVOC style.Ã¢â‚¬Â

Veal is coming off an outstanding season with the Raiders of Northwest Florida State College, where he averaged a near double-double with 11 points and eight rebounds a night. His stellar play earned him Panhandle Conference Newcomer of the Year honors and he was a key component in the Raiders run to the 2010 NJCAA National Tournament and a No.5 national ranking.

Ã¢â‚¬Å“Toby is an impact frontline player, which is our most pressing need,Ã¢â‚¬Â Smart stated. Ã¢â‚¬Å“He will provide us with strength, toughness and athleticism from day one.Ã¢â‚¬Â

He chose to join the Black & Gold after receiving interest from LSU, Arkansas and Southern Mississippi.

Ranked as the eighth-best center on the West Coast by Scout.com, Haley will bring a 6Ã¢â‚¬â„¢ 11 Ã‚Â¾Ã¢â‚¬Â, 230-pound frame to the Verizon Wireless Arena at the Stuart C. Siegel Center next season. He averaged a double-double for Falcons of Palmdale to earn a spot in the 2010 East/West California All-Star Game.

Ã¢â‚¬Å“D.J. Haley is a near seven-footer with a very high ceiling,Ã¢â‚¬Â Smart said. Ã¢â‚¬Å“He runs extremely well for his size and possesses a very good touch around the basket.Ã¢â‚¬Â

HaleyÃ¢â‚¬â„¢s success is not limited to the hardwood. He carried a 3.7 grade point average during his time at Palmdale. He chose the Rams over interest from Drake, Iowa State, Colorado and Penn.

Rounding out the trio of new additions is the powerful inside presence of Reddic. The 6Ã¢â‚¬â„¢ 9Ã¢â‚¬Â, 215-pounder was ranked the 20th-best center in the country by ESPN.com and led the Fighting Pharoahs of Quality Education Academy to the 2010 National Christian School Athletic Association Division I National Championship.

Ã¢â‚¬Å“Juvonte possesses phenomenal upside and a very good ability to learn,Ã¢â‚¬Â Smart commented. Ã¢â‚¬Å“His length and athleticism make him ideally suited for our style of play.Ã¢â‚¬Â

He averaged 16 points and 15 rebounds during his senior season and Scout.com rated Reddic as one of the three best available big men in the spring of 2010.

After receiving interest from Maryland, Georgetown, Oklahoma, Auburn and Ole Miss, he chose to join the Black & Gold next season.

Ã¢â‚¬Å“I think itÃ¢â‚¬â„¢s an incredibly diverse group of guys that will ultimately help them continue to compete for league championships every year,Ã¢â‚¬Â Scout.comÃ¢â‚¬â„¢s National Recruiting Director Dave Telep said. Ã¢â‚¬Å“ItÃ¢â‚¬â„¢s not often you can bring in a near 7-footer in D.J. Haley, a guy who was recruited at the mid-to-high level in Juvonte Redic, an incredibly gifted and long guy in Reco McCarter, a multi-positional threat in Toby Veal and a late bloomer who just gets it done in Rob Brandenburg.Ã¢â‚¬Â