With all the talk about Wake Forest and going to Madison Square Garden, it’s easy to lose sight of the fact that we still have to get by our first-round opponent in the Winthrop Eagles on November 15th. The Winthrop program is as close to a dynasty as you’ll get in college basketball today, with 9 Big South Championships in the past 12 seasons dating back to 1999 (1999, 2000, 2001, 2002, 2005, 2006, 2007, 2008, 2010). Their lone NCAA victory in those 9 appearances occurred in 2007 as an 11-seed knocking off 6-seeded Notre Dame in the first round (11-seeded VCU knocked off Duke in the first round that same year). Any ideas of us being able to roll over Winthrop simply on account of their Big South affiliation are foolish. Winthrop is not going to back down from us at all and will want that shot at Wake and Madison Square Garden as much as we do.

Winthrop is coming off a 19-14 season where they lost in the NCAA play-in game to Arkansas-Pine Bluff 61-44 after upsetting a 28-7 (15-3 Big South) Coastal Carolina team on Coastal’s home floor in the Big South Championship on ESPN this past March. They are used to success and expect nothing less. Randy Peele’s program is built on a strong foundation laid by Gregg Marshall (now head coach at Wichita State). The Eagles return 3 of their 5 starters from last year and return 5 of their top 6 scorers.

The Eagles are led by a pair of rising juniors in Reggie Middleton, the lone double-digit scorer from last year (10.1 ppg) and 6’9, 235-pound center Matt Morgan (9.6 ppg). The Eagles are on the small side this year, as both graduated starters (Mantoris Robinson and Andy Buechert) were forwards. The size issue was further exacerbated by off-season troubles in Rock Hill as a number of players were involved in an incident involving marijuana, and subsequent suspensions were handed out to current Winthrop players and projected starters Charles Corbin (6’7 senior forward out for the fall semester, avg’d. 6.7 ppg and over 5 rpg) and Robbie Dreher (6’4 sophomore guard, suspended for the first 4 games, avg’d 5.9 ppg). Both of these suspensions mean that the 2 players will be unavailable for the game against VCU. With Robinson and Buechert having graduated and Corbin/Dreher suspended for the semester, the Eagles are lacking both in size and scoring punch going into the Pre-season NIT. The Eagles have a bona-fide starting big man in Matt Morgan who should average double-digits this year and make a nice jump in his game after coming along nicely down the stretch last year, but they have little besides him and will need 6’8, 235-pounder George Valentine to really step up and be a factor. Valentine averaged 4 points and 4.6 boards in 7 games off the bench last year before sitting out the rest of the season. The reserve big man has proven to be a solid defender in the post and a good rebounder on occasion; the Eagles will need his best effort to match-up with a much bigger and deeper VCU front court; suspended big man Charles Corbin was their leading returning rebounder and the only returning player who averaged over 5 rebounds last year. With the limited front court depth the Eagles have, 6’11, 243-pound Nigerian freshmen (and former SMU commit) Julius Francis will also be asked to step up and contribute early on and 6’7 redshirt-sophomore guard Gideon Gamble may even be asked to play the 4.

While VCU’s frontcourt is also relatively young, we have the luxury of throwing lots of fresh players at Winthrop. Having 6’9 245 Jamie Skeen, 6’8, 235 Toby Veal, 6’9 225 Juvonte Reddic, and 7’0 250 DJ Haley means that the Rams will likely try to take advantage of their depth by going at Morgan early and getting him into foul trouble. After Morgan, the quality in Winthrop’s front court drops off dramatically and the Eagles will be forced to play small, likely employing a 4-guard lineup. Winthrop will have play at a faster pace, which fits right into VCU’s style of play. Winthrop only put up 61.9 ppg (allowing 61.4 ppg to their opponents) last year to VCU’s 76 ppg and the Rams scored 1.29 points per possession to Winthrop’s 1.06, which means we want to play high tempo and get as many possessions as possible. Another distinct advantage is that we shoot the ball much better than Winthrop with regards to overall FG% (46.2% to 38%), 3 FG% (36.6% to 24.8%), and FT% (70.4% to 64.4%). Winthrop will take chances and try to turn us over so the VCU guards have to be mindful of being careful with the ball. Winthrop made opponents turn over the ball almost 15 times a game and like the Rams averaged close to 9 steals per game. 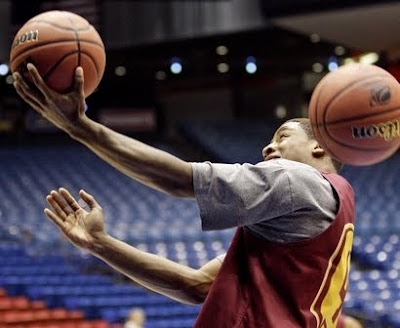 Middleton is their main offensive threat and has big-game ability (26 pts. against Liberty, 25 pts. against High Point, and 22 pts. at VMI last season testify to this), but won’t have too much in the way of backcourt help against VCU. One-time VCU target Andre Jones will likely have to step-up into the starting lineup in the wake of Robbie Dreher’s suspension. Ram fans may remember that Jones was once a highly-touted 4-star recruit as a junior at Nansemond River with offers from Virginia and Virginia Tech among others before he fell off dramatically in his high school senior season and ended up at Winthrop. He actually regressed a great deal from his freshman year last season going from a freshman starter to a bench player as a sophomore. His averages across the board went down (26 to 21 minutes per game, 9.1 ppg to 5.9 ppg, and most remarkably his team-leading 33.7% 3-point shooting as freshman went down to a woeful 21.7%). The 6’2 junior will likely need to regain his 1st-year form in order to help Middleton in the back court. After Jones, Justin Burton (3.9 ppg) and Gideon Gamble (3.5 ppg) are the returning guards coming off the bench. Incoming 6’5 freshman Joey Jerome is also expected to contribute in the back court, but will likely not be ready to play a significant role early on against VCU. The Rams will most likely put defensive stopper Ed Nixon on Middleton in hopes of stifling his scoring and play tight perimeter defense as a team, letting Winthrop’s other guards bomb away from behind the 3 point line (we’ll let them shoot those all day with a sub 25% success rate).

The key weaknesses with Winthrop appear to be front court depth, and overall shooting as a team. By pushing the tempo and going to our bigs early and often, VCU has a good chance to take this if we impose our will upon the game. We’ll need our guards to take care of the ball and put pressure on the Eagles’ guards to shoot from outside and prevent too much penetration in the lane. This will be a good chance to see what our freshmen bigs can do. There won’t be too much in the way of front court experience on the Winthrop squad outside of Matt Morgan and George Valentine, so Reddic and Haley should get plenty of opportunities to get some run in real-game situations early on. This should prove very valuable later on down the road in subsequent tournament matches as well as the CAA conference slate where it will really count for us.

While the numbers seem to suggest VCU should be able to handle Winthrop, we also have to remember that these kids have a lot of pride and are not just going to lie down for VCU. This is a program used to winning and lots of it at that. We’ll need to be on our A-game and not be looking ahead to Wake or Madison Square Garden or anything like that. We need to have a singular focus going into the tournament and that focus should be Winthrop and nothing else.