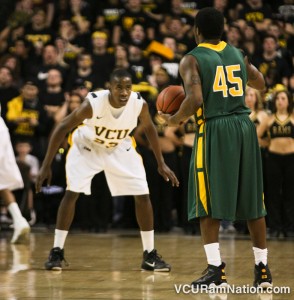 Having faced each other just once a year for the past four seasons, VCU and Mason will tip it up for the first of a two-game regular season series Tuesday night in Fairfax. There will be no love lost as the CAA’s only Final 4 banner wavers engage in a Valentine’s Day battle for first place with just three conference games remaining.

If VCU v Richmond is the Black and Blue Classic, this one should probably get a name too. For now we’ll just call it the Flagship Classic, as Mason thrust the CAA into the national spotlight with a miracle Final 4 run in 2006 that most CAA fans thought might never be duplicated, let alone just five years later with VCU one-upping the Patriots by having to win an extra game, playing in the NCAA tournament’s first ever First 4 round of 68 before taking the CAA from a fluke run in 2006 to an official contender in 2011. Needless to say, there will be no “Final 4…clap clap, clap clap clap” chants in this one.

Both teams had to adjust to major changes heading into this season. The Rams lost four key seniors from last years run, Mason lost a legendary coach and a couple of key guards in graduating Cam Long and losing Luke Hancock with a transfer to Louisville.

Mason and VCU were picked to finish second and third in CAA, but both hope to keep pace with preseason top-pick Drexel as we wind down the regular season and battle it out for CAA tournament seeding.

A quick look at VCU: The Rams have caught fire since losing two-straight in early January, grinding down 11-consecutive opponents, most recently in a dramatic 68-64 victory at rival Old Dominion. During that span, VCU has held eight opponents to 60 points or less, five of those under 50. The Rams have needed that defensive consistency however, as VCU has struggled to score at times, including senior Bradford Burgess who has posted just three double-digit scoring performances in his last nine games. The good news for the black-and-gold however is Burgess seems to have regained his stroke, posting back-to-back 22+ point performances against Towson and most recently ODU. While the Rams have struggled with consistency offensively, they do posses a number of weapons. Six Rams have posted at least 15 points in a game while at VCU, four of which have at least one 20-point game. Make no mistake however, this year’s VCU squad will be remembered for their defense, currently lead by freshman Briante Weber who tops the CAA in steals and steals per game with 2.3 per contest, 62 total on the year. The Rams lead the nation in total steals as well, with 278 total, 14 more than the #2 nationally ranked Syracuse Orange.

A quick look at George Mason: The Patriots had some growing pains early this season after losing a legendary coach at GMU in Jim Laranaga. Like Lebron, Coach L took his talents to South Beach as the new coach of the Miami Hurricanes, causing a small chain reaction that had to have played a major part in Luke Hancock’s decision to transfer to Louisville after his sophomore season in Fairfax. Hancock was a key player in Mason’s successful run into the NCAA tournament’s round of 32, averaging 10.9 points per game including a major three-point basket that gave the Patriots their first-round win against the Villanova Wildcats. Along with Hancock, the Patriots had to replace top scorer Cam Long, a 6’4 guard who often saw the ball when Mason needed a big basket. Even with those losses, new head coach Paul Hewitt was left with a pretty full cupboard, returning All-CAA first teamer Ryan Pearson and senior big man Mike Morrison. Hewitt was also able to score Scout.com’s 6th-best center for this year’s freshman class in bringing in Erik Copes after previously deciding on George Washington. Pearson and Morrison lead the Patriots in both scoring and rebounds, Pearson posting 17.6 points per game, good for third in the CAA, and grabbing 8.5 rebounds a night, also top-5 in the Colonial. The Patriots have won nine of their last 10 contests, with their only loss a 5-point road “L” to the surging Delaware Blue Hens. Mason has one home loss this season, falling 75-64 to Duquesne (14-10) all the way back on December 21st. Tuesday’s game will be a classic battle between a great offense and a great defense, as George Mason leads the conference in scoring at 70.4 points per game.

Tale of the tape…

VCU wins if: The best offense really is a good defense. The Rams have prided themselves on their ability to create extra possessions by turning teams over this season. George Mason has averaged 15.6 turnovers in their six losses this season, the two most lopsided contests (UVA and Duquesne) a result of the Patriots turning the ball over 20+ times. This may bode well for a VCU team who is one of the best in the nation at turning over it’s opponent. The Rams will also need to attack the glass. The Patriots lost the rebound battle in five of their six losses, having only won the war of the glass in a 79-76 overtime loss to Florida International. VCU will also need to keep sophomore Juvonte Reddic (10.5 points, 6.7 rebounds) on the floor and off the bench as well. Reddic is averaging just 6.6 points in games where he fouls 4+ times. He’s also posted single-digit scoring in three of VCU’s five losses.

Mason wins if: They are as poised against the Rams pressure as they were last year at the Siegel Center. VCU has really struggled to score at times, so if Mason gets hot in front of what’s likely to be a near-capacity crowd, it may be difficult for the Rams to keep up. GMU HAS been able to win ugly, including a February 4th 54-50 W against ODU in a night Mason managed just 27.7% shooting, but the Patriots would prefer to keep the score out of VCU’s current comfort zone. The Patriots will also need someone outside of the usual suspects to step up if they want to defeat this VCU squad. Sophomore guards Vertail Vaughns and Byron Allen are both capable of big games, but shot way under their 40% (Vaughns) and 41% (Allen) field goal averages in Mason’s two CAA losses. The duo is averaging a combined 16.5/game, but posted a combined 4.25-point average in the losses at Drexel and Delaware, hitting just 21% of their shots in those games.

Game tips at 9PM in Fairfax and viewable on Comcast SportsNet. Tickets are still available for Ram fans looking to make the short trip up 95 North.

Mat Shelton-Eide
VCU School of the Arts (BFA '07) and Center for Sport Leadership (M.Ed. '10) alumnus, Mat has followed VCU basketball since the Sunbelt days when he'd...
that is so awesome, i am so there!! as a recent grad of VCU and am living in Northern Va i can finally support my rams up here in person instead of in spirit!! GO RAMS GO
bet you wish you didnt go now right??