Sidebar
Menu
Install the app
We have detected that you are using an adblocker to block advertisements. Advertising helps us to offset the cost of hosting these forums. We ask that you please add an exception to your adblocker to help support us.
You are using an out of date browser. It may not display this or other websites correctly.
You should upgrade or use an alternative browser. 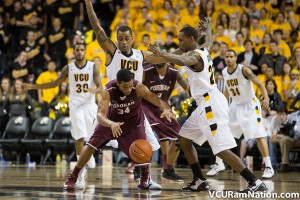 After knocking off Rhode Island and Fordham in consecutive games, the VCU Rams can claim the title of “THE” Rams in the A-10.

VCU knocked off both northern Rams teams after dropping their previous two games, and move to 6-2, good for a .5-game lead over our new conference mates in the Atlantic 10.

Troy Daniels found his stroke and used it to dominate Fordham’s zone looks, hitting 10 of his 19 looks including seven from long range, good for a game-high 29 points.

Daniels’ three field goals inside the arch were a season high for the senior.

The win moves VCU to 6-2, temporarily good enough for first place in the A-10 (three teams having played one less game and are tied for second at 5-2).

VCU will take a week off before traveling to Charlotte this Saturday.