Let’s get the obvious out of the way early: congratulations to the Saint Louis Billikens. They have a very talented team that is poised to make a deep run through this year’s NCAA tournament. They fought hard all season in overcoming the loss of former head coach Rick Majerus to heart failure, then a hostile environment this Sunday against VCU to earn their first-ever A-10 tournament championship, and we tip our hats to them and applaud their perseverance in doing so.

But in that last run-on sentence however sits what I think most will say was one of the biggest stars/winners of this season’s A-10 tournament: VCU fans and the impressive way they made the nearly six hour trip to make the Barclays Center in Brooklyn look like Siegel Center North.

For years CAA opponents complained of VCU’s unfair advantage in playing the conference tournament in their own backyard (The Richmond Coliseum), but with that, often times made the false assumption that had VCU been forced to travel, wouldn’t have been a force in perhaps a northern city like Philadelphia or even DC for that matter.

That assumption was blown to bits this weekend and soon enough A-10 fans might have to start the complaints that the 334 mile distance from the Siegel Center to the Barclays Center is too close for VCU fans as well.

Thousands made the pilgrimage from RVA to NYC, greatly outnumbering their conference rivals, turning their chants into V-C-U rally cries, and painting the interior of the newly built arena with stroke of black and gold.

The three day parade of VCU spirit was even grand marshaled by actor/director Spike Lee, who sat front row center court throughout the weekend, wearing VCU colors and even a No.50 VCU jersey during the Rams A-10 tournament final. 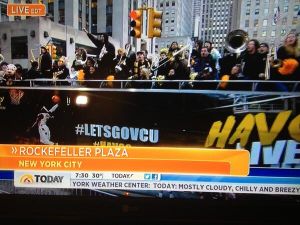 VCU buses cruised the streets with giant Vector Media wrapped images of havoc, even making an appearance with Al Roker on The Today Show Thursday morning.

ESPN analyst Dana O’Neil tweeted, “I know VCU doesn’t fit Catholic 7 ‘model’ but if you want rabid fans, great hoops and an unreal atmosphere, it’s a no brainer (Sorry A10)”, while watching the Rams play UMass in an A-10 semifinal matchup.

(Quick backstory in case you live under a rock: the Big East conference broke up, is forming a new conference, VCU is in the discussion but is often on the outside looking in because they are the only public school being seriously talked about to join what would be an otherwise all private school league that will include the likes of Georgetown, Marquette, Villanova, Xavier, Butler and potentially others from the A-10 as well).

UMass forward, Terrell Vinson, told MassLive.com, “I guess their crowd travels wherever they go”, adding, “We can’t get caught up in the crowd situation.” UMass is a 26,000+ enrollment public school located in Amherst, Mass–a three-hour drive from Brooklyn.

One of the other winners of the weekend was most certainly the Die Koelner Bierhalle bar in Brooklyn which hosted VCU from almost sun up to sundown, as Ram fans filled the cavernous German bar throughout the entirety of the weekend, creating what seemed like an endless pep rally from Thursday through Sunday.

VCU fans have just a few days rest before having to travel to Auburn Hills, Michigan (654 miles) for a Thursday matchup with Akron (a school just three hours from AH) before potentially facing the Michigan Wolverines on Saturday. If VCU and their fans can make it past the NCAA tournament’s first weekend they would then travel to Dallas, Texas (roughly 1,300 miles) for another potential Texas showdown against Kansas.

Another magical run through March would put VCU in a Final 4 weekend in Atlanta, just under the 600 mile mark. If that happens warm up the buses, break out the pickle juice and polish up those glass boots, because we might have another major party in the making.