Coach Shaka Smart and his staff received great news when 6’8, 240-pound PF Terrance Shannon was cleared to play for VCU for the upcoming 2013-2014 season. Shannon previously played in the ACC at Florida State and was the third-leading scorer (7.9 ppg), second-leading rebounder (5.9 rpg), and team leader in steals per game (1.2) last season. He averaged 8.9 ppg and a team-leading 6.5 rpg through the first 16 games before suffering a neck sprain in Charlottesville against UVA on January 19th, 2013.

Shannon was granted a medical red shirt season in June of 2012 by the NCAA and the ACC after playing only 7 games that year due to a left shoulder injury. He graduated from FSU with a degree in interdisciplinary social sciences with a concentration in urban and regional planning in May of 2013. Per NCAA rules, Shannon can transfer and be immediately eligible due to having graduated and will pursue a Master’s degree at VCU. 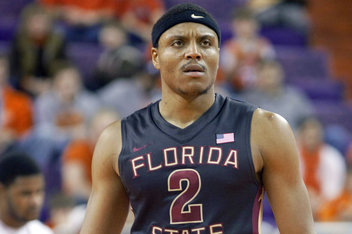 VCU fans may recall that Terrance Shannon faced off against the Rams in the 2011 Sweet Sixteen while at Florida State. He was a regular front court rotation player in the ACC and was a part of 3 NCAA teams at FSU over his career there. He will be a great help to VCU forward Juvonte Reddic in the front court and provide a baseline scoring presence and much-needed size that will free Reddic up and make the team more difficult to guard.

VCU is widely regarded as a preseason top 25 team by every major sports media outlet in the country. This news only brightens VCU’s prospects for another special season. With Shannon and Reddic in the front court and Treveon Graham able to move back to his natural SF position, the Rams will be versatile, big, and skilled.