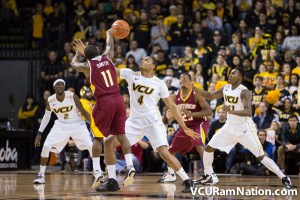 Coming off an exciting road win in Charlottesville Tuesday night, VCU returned to the Stuart C. Siegel Center on Saturday to host the Winthrop Eagles (Big South Conference). The teams met last year in North Carolina, where the Rams would dominate Winthrop and while the result was the same, this years 92-71 win, would not come as easily.

Winthrop gave the Rams a run for their money early, tying the game at 19 each 7 minutes in after the Eagles hit their first 5 three pointers. Senior Juvonte Reddic kept the Rams in front, connecting on two three pointers to keep the Eagles in check. VCU would go into the half up by just 4, 45-41.

The second half saw more of the same from both teams, keeping it close until 5 minutes remaining when a three from Sophomore Melvin Johnson would bury from long range to give the rams some breathing room with a 15 point lead.

VCU had 6 players scoring in double digits on the night. Juniors Briante Weber and Treveon Graham, would lead VCU in scoring on the night with 16 and 13 respectively. Senior Juvonte Reddic had 11 points while Senior Rob Brandenberg dropped in 11 and Freshmen JeQuan Lewis with 11.

The sixth Ram who scored 10 was red shirt freshman, Mo Alie-Cox who had the best game of his young career. Alie-Cox showing his versatility, also grabbed 6 rebounds in the win.

After seeing a large discrepancy of foul calls after Tuesday in Charlottesville, the Rams found themselves at the line almost twice as many times as Winthrop. VCU found themselves going 34 of 48 from the line while the Eagles were 17 of 25. Tonight marks the 31st straight game in which VCU has forced 15 or more turnovers.

VCU will travel down to Puerto Rico to take part of the Puerto Rico Tip Off Challenge along with Kansas State, Michigan, Georgetown and more, and will open against Florida State on November 21st.