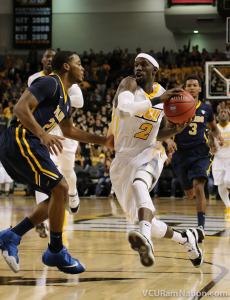 After getting a win in Annapolis over Tennessee on Friday, the crowd at the Verizon Wireless Arena at the Stuart C. Siegel Center welcomed VCU for their home opener as they hosted Toledo out of the Mid American Conference. The Rockets proved to be a more difficult task than the Volunteers but VCU managed to get a hard fought 87-78 victory.

VCU and Toledo exchanged the lead 5 times in the first half and 12 times total as the Rockets seemed to break VCU’s full court press with ease at times. Not to say VCU’s defense had no effect. The Rams forced 21 turnovers converting those into 33 points on the win.

Senior Briante Weber returned to action tonight and his impact was felt immediately. After missing the game on Friday due to a violation of team rules, the guard from Chesapeake managed to have his hand on seemingly everything. Weber had 9 steals on the night while also grabbing 8 rebounds, 18 points and 7 assists.

After being tied at 66 with about 8 minutes remaining, Weber would dominate on both sides of the ball for the next 4 minutes to give VCU the lead 73-68.

Junior Melvin Johnson once again had a hot hand for VCU as he hit a deep three with just 2:26 remaining to put VCU up by 6 point. He chipped in 17 points at the break and finished the night with 22. Senior Treveon Graham also battled his way to 22 points.

The Rams got a taste of their own medicine though as VCU turned the ball over 13 times, allowing Toledo to convert that into 11 points. The match up on the glass was just about even with VCU having the advantage 34-32.

VCU will try to get their 2nd win at home on Thursday night as they host University of Maryland-Eastern Shore at 7pm.