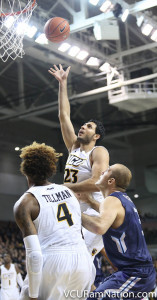 Earlier this December, with VCU grinding its way through a tough road test at Middle Tennessee State, head coach Will Wade inserted Ahmed Hamdy-Mohamed into the lineup with about four minutes to play in the first half. The Rams were trailing 22-21 and needed a lift.

Hamdy clogged the middle on his first possession in the game, allowing Doug Brooks to grab a steal that led to a JeQuan Lewis layup and a VCU lead. Less than a minute later, Hamdy bulldozed the paint and hit a smooth layup to give VCU a six-point lead. And a nifty baseline spin move, one of those “where did that come from?” moves, closed out the VCU scoring.

In those last four minutes, Hamdy scored twice, grabbed two offensive rebounds, and one defensive rebound. Hamdy provided the offensive lift Wade wanted, and the Rams pulled away in the second half for a victory.

It was that kind of effort–not just with the basketball in his hands, but in everything he does on the floor–that first attracted Wade to Hamdy at a JUCO showcase event this past summer.

“I love him because he is so aggressive. He’s big and physical and will go get the basketball,” says Wade. “I’d much rather coach to ‘whoa’ than ‘go,’ and that’s what Hamdy gives us.”

It was a circuitous route that landed Hamdy in RVA. He was playing for Egypt’s under-17 national team at a tournament in Germany, and as a 15-year old he had posted three-straight double-doubles. He was spotted by Marco Morcos, a native Egyptian who has lived most of his life in the United States and was a Rice University assistant coach.

Morcos encouraged Hamdy, already ahead of players his age offensively, to come to the United States and face stiffer competition. Hamdy did just that, and after high school committed to play at Houston.

However somewhere in the NCAA eligibility hamster-wheel, it was determined Hamdy would be ineligible his first season, so he transferred to Lee (TX) junior college, where he averaged a double-double and shot 55% from the field.

Wanting a big man and needing a rebounder, Wade was dogged in his pursuit of Hamdy, and eventually got the 6-9, 245-pounder to commit. Hamdy chose VCU over Wichita State, Washington State, St. John’s, and Missouri. He has two, and possibly a third, season with VCU.

Hamdy had options, and it came down to being very comfortable with Wade.

“He was cool at first and didn’t really talk abut basketball,” says Hamdy, laughing and smiling a relaxed smile, “but then he did and I felt comfortable with him.”

He prefers to be called Hamdy, pronounced Hahm-dee, and he has been a pleasant surprise in VCUs early-season games. The Alexandria, Egypt native is averaging almost seven points and four rebounds while playing just 13 minutes per game. He’s shooting 57% from the field.

Hamdy has played his best against the best opponents. He scored 10 points in 12 minutes against Duke, and had 13 points and eight rebounds against Wisconsin. Hamdy hit 11 of 18 shots in just 37 minutes of play in the trip to New York against the two teams that played for last year’s national championship.

Hamdy’s impact stretches beyond numbers. His ability to pound down low helps take some of the physical burden of post play off of Mo Alie-Cox–a luxury VCU and Alie-Cox did not have last season. He is deceptively quick with his first move–whether a spin move, or fight for a rebound. Hamdy’s attack has been called awkward, but it’s really just that he makes his move before the defense can react. It may look funny at times, but it’s very effective. Coaches call that being efficient with your body, and it’s a huge advantage when you’re 6-9.

But Wade knows there’s plenty of room for growth.

“He’s giving us a lift offensively,” says Wade, “but we need him to finish better around the rim and still need to get him better on defense.”

For his part, Hamdy agrees.

“Yeah, coach is right,” says Hamdy, again smiling and laughing. “This game is so much faster, so much more up and down and a lot more physical. I have to learn things like hedges and shadows so I’m learning and running. I used to love to run all the time but got out of it a couple years ago, so I’m getting back to that.”

He gets to run in Wade’s mercurial system, and bangs with Alie-Cox every day in practice. Regarding the Alie-Cox matchup, Hamdy says “it hurts. A lot.” Both players benefit from Hamdy’s presence.

For all of those reasons Hamdy is becoming a VCU fan favorite, and when asked about it the wide smile becomes more of a sheepish smile, as if he is almost embarrassed by the attention.

“I don’t know,” he says, smiling and shaking his head side-to-side. “I guess I do things they like. I don’t know.” When reminded of that spin move against MTSU, he again smiles and adds one more I don’t know.

If you cannot already tell, Hamdy does a lot of smiling and laughing. He’s very relaxed and easygoing, which belies the way in which he sledgehammers around the basketball court. Hamdy is a big guy with a commanding presence but the minute he smiles it disarms the conversation. He’s one of those guys that’s comfortable and at ease with any situation.

It’s a curious, low key approach and background of travel that has allowed Hamdy to adapt well to life in Richmond. He rooms with Jon Nwankwo on the road and enjoys hanging out with teammates and friends and exploring his new surroundings in the city of Richmond. Hamdy says he enjoys American life, noting that “the people are friendlier over there (in Egypt), but I like it here better because people are not in your business as much here than they really are over there.”

Hamdy grew up in Alexandria and lived there with his parents and younger sister until he came to the United States. He will get to go back to see them next May, once basketball and the academic year have concluded. Thinking of that visit brings another kind of smile to his face.

At the very end of the interview Will Wade happened to walk by.

“Your first interview Hamdy. You’re getting interviewed so you must be a good player,” said Wade, with his own grin. “You were really good at practice today. You had a good day. Let’s keep that going.”

Hamdy again flashed that smile and answered in a low key way.

“I will coach. I am going to be that player.”