Senior Jordan Burgess is ready. It may be his last year putting on the black and gold for the Rams but he is ready to leave it all on the court. 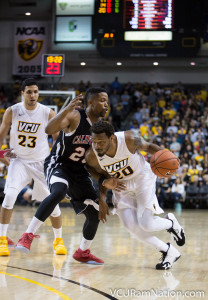 We sat down with the Richmond native and talked to him about what it means to him to play for the same school where he and his brother, Brad, played basketball in summer camp.

He also tells us how important his parents are to him on and off the court.

He joined us after a workout and we learn how hard he is working to make sure that he leaves his own legacy for VCU fans to remember.