RowdyPkunk said:
Actually it's no official yet for your Cards. Only 3 games up on the Brewers & 4 up on the Cubs. And for what it's worth, you're only 2 games up on the Nats. With about 10 games left go.... if the Cubs (who have 6 games left with the Cards) & Brewers get hot, and the Nats stay on track, You guys could find yourself on the outside looking in.

That being said, I don't trust the Cubs who have now lost 3 in a row & lost 2 out of 3 at home to the Reds. And I don't think the Brewers can run the Table (despite the easy remaining schedule) which is probably the only see the Cards not winning the division. And the Nats have a tricky schedule sort of. They got 3 on the road in Miami... shouldn't be too much of a problem... but then they end with 5 against Philly (a rival) and 3 against the Indians.... who still have a lot to play for.

In the NL, I'm Pulling for anyone not named the Nats, Cards or Dodgers. So basically that narrows it down to either the Cubs or Brewers.... and of course my Bravos!

Oakland has been up and down more than a Roller Coaster, and neither Tampa nor Cleveland really make me think they will make any noise in the playoffs.

That leaves me with the Yankees & the Astros. Biggest question mark to me is how do the Yankees set up their rotation & their Bullpen? Yankees just lost German for the rest of the year at least (due to a domestic violence investigation). And they lost Betances due to injury for the rest of the season too. Then you have C.C. who hasn't pitched 5 innings or more since July 16th, and he hasn't recorded a Win since June 24.... so surely you can't have him in your rotation, and maybe not even on the postseason roster.

I'm honestly expecting a Dodgers-Astros WS.... but I'd rather my Braves get there and win.
Click to expand...

I have some friends I play pickup basketball with, and we're considering making a road trip to Atlanta Oct 3-4 if the Cards do face the Braves. It's only a seven hour drive from Roanoke. If you can make it down there, let me know and I'll buy you a beer! ?

Beirne said:
I have some friends I play pickup basketball with, and we're considering making a road trip to Atlanta Oct 3-4 if the Cards do face the Braves. It's only a seven hour drive from Roanoke. If you can make it down there, let me know and I'll buy you a beer! ?

If I could I would.... but prob won't be able to.
Reactions: Beirne

I'd watch out for my Nats...they have first rate starters, an excellent lineup, pretty good defense....aaaand one of the worst bullpens in MLB history.

QUESTION: How do the Cards match up with the Braves?

COMMISH: Not many teams match up with the Braves, who can throw Freeman, Acuna Jr. and Donaldson at you from a power standpoint. Atlanta is a better-than-average defensive team, but the Cardinals have a clear edge in the bullpen. If they are close or ahead late, the Cardinals can win the series. But can they keep the Braves off the board enough to make that happen? Atlanta clearly gets more production from its lineup than the Cardinals do.

Follow-up: The Atlanta draw is better than having to play LA in the first round. If the Cards can get past Atlanta, they'd have a better shot at beating the Dodgers a 7-game series.

COMMISH: I think most fans would agree, but the Braves are not to be dismissed. They are above average in most categories, except perhaps their bullpen, which has been revamped, but still is a question mark. It cost them against the Dodgers last year but I think it might be a little better than it was.

Rick Hummel is an American author and sports columnist best known for his work for the St. Louis Post-Dispatch. Hummel was inducted into the National Baseball Hall of Fame in Cooperstown, New York in 2007 when he was honored with the J. G. Taylor Spink Award for baseball writing. 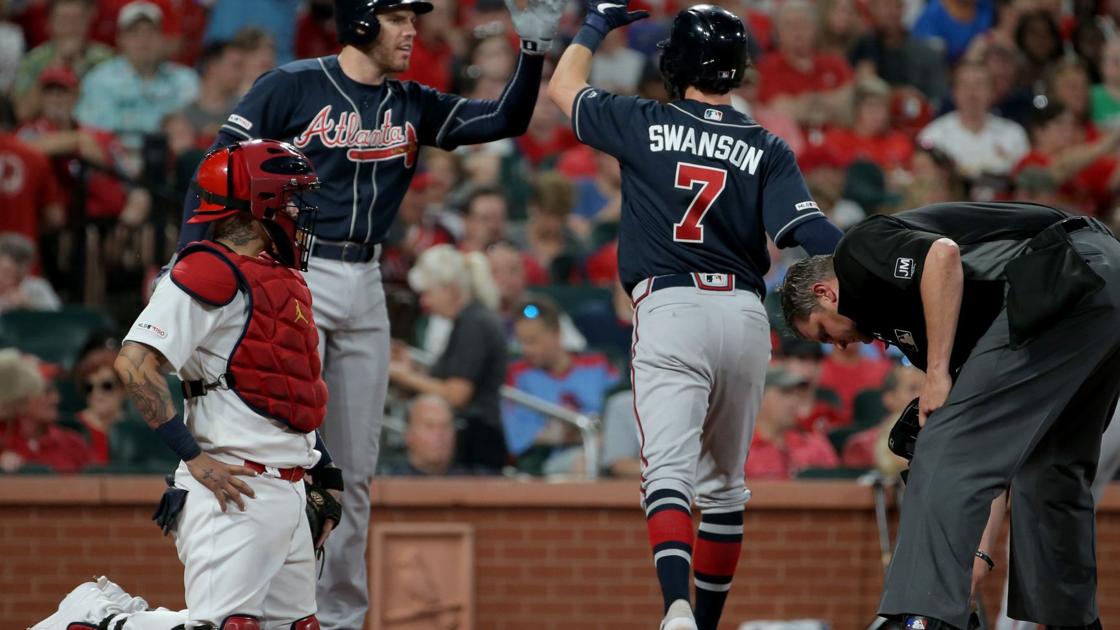 MATCHING UP WITH THE BRAVES

QUESTION: How do the Cards match up with the Braves?

Whatever happens, it has been a remarkable few months for the Nationals. On May 23, the Mets had just finished a four game sweep and the Nats were 12 games under .500.

Most wins in MLB since that day:
Astros 70
Yankees 70
Dodgers 69
Nationals 69

Last night they got to celebrate making the playoffs after the awful start, a feat only 2 other teams have done ever. The bullpen is still bad and they have several key players less than 100% including their ace and their closer. But no one can take away these last few months - Nats fans watched a lot of really fun-to-watch baseball.

Here we go.... playoffs are set

Probably gonna be dead wrong on most of these.... but here goes nothing.

Championship Series
Dodgers beat Braves in 6 games (NLCS)
Astros beat the Yankees in 5 games (ALCS)…. (Giving the Yanks a shot to win 1 game... no more than that).

I'm not gonna do the whole head/heart thing again this year....
This is just what I'd like to see!

Beirne said:
The season is long and frequently unpredictable. And I'm never good at the predictions game anyway, so with that in mind here ya go!

My original preseason predictions weren't too bad....
Three divisions correct, one wildcard, and one division prediction ended up a wildcard.
Oh, and my World Series prediction is still a possibility! ?

Beirne said:
I'm not gonna do the whole head/heart thing again this year....
This is just what I'd like to see!

If we're doing what we'd like to see.... here's how mine would be

Congrats on the win last night @RonnieDobbs.... man did ya'll get luck there in the 8th or what? lol

RowdyPkunk said:
Congrats on the win last night @RonnieDobbs.... man did ya'll get luck there in the 8th or what? lol
Click to expand...

@Beirne Just gonna go ahead and say it now after last nights game. Congrats. Enjoy moving on to the next round.

RowdyPkunk said:
@Beirne Just gonna go ahead and say it now after last nights game. Congrats. Enjoy moving on to the next round.
Click to expand...

I'm honestly shocked we are now up 2-1... after the way we lost Game 1, and where yall had your Ace in Game 2... I figured yall were going to shut us down and be up 2-0 going into today. Our only saving grace today was Wainwright's pitch count got high and had to come out in the 8th inning.... cause he was mowing us down for the most part.