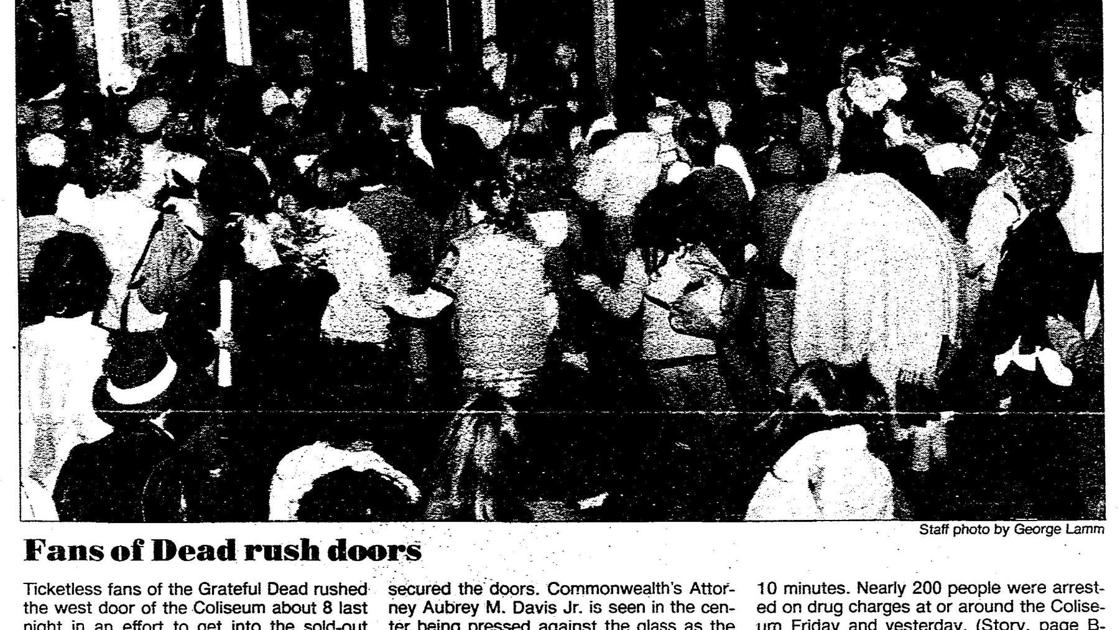 From the archives: That time the Grateful Dead got banned from the Richmond Coliseum

This article originally ran in the Richmond Times-Dispatch on Nov. 3, 1985. The Dead were banned from playing the Coliseum after this incident. A 1987 concert at the State Fairgrounds

Yeah, I assumed they were banned from the Coliseum because money was needed to fix the school system (sarcasm alert).
Last edited: Oct 18, 2019
Reactions: SPI-DA1, Newboy, Ramdog and 3 others

Hmmmmm. I went to that concert in 85'. Perhaps I am the one to blame for getting the Dead banned!.....LOL.

To be honest, this is more of an indictment on the stupidity of Richmond rather than anything that happened at the concert. The city was just not happy that there were a bunch of fans who didn't seem to spend a lot of money on hotels and restaurants in the city. Many concertgoers instead crashed at their friends apartments and chose 7-11 munchies of restaurants down in the slip.
Very short, short sighted in my opinion. At that time, bands were happy to go where the Dead were openly welcomed to come and play. After they were banned, I heard a number of people calling Richmond a stuck up city not willing to cater to young people, eager for entertainment.
I personally think it really hurt Richmond in the long run. It's a shame when the state's capital city can't attract any major entertainment but the circus and wrestling.....fu*king sounds like Charleston, WV for God's sake. Everything has to be "Family directed" meanwhile Morgantown and Huntington cash in on the big venue business.
Last edited: Oct 17, 2019
Reactions: 757RamFan and BaNgMyPrOgRaM

I don't remember a lot since the whole thing. ?I do remember being one of those who pushed the doors open. A few times.
Reactions: BaNgMyPrOgRaM

I was there...for once I can say I did not contribute to the mayhem...lol

Mistachill said:
Yeah, I assumed they were banned from the Coliseum because money was needed to fix the schools system (sarcasm alert).
Click to expand...