The Official Beat the Davidson Wildcats in North Carolina Thread

Timeout or no time out, there were good reasons to miss based on the time on the clock. First, if MBJ shoots the ball with normal arc, we are talking about .3 or less on a miss. Even with the straight line miss and .4 left, forcing them to use a time did one critical thing. It forced it to be a spot inbound because of the miss. It is way harder to get a clean long distance look with a spot inbound as opposed to being able to run the base line. People can state all day that the staff may or may not have been misinformed but it was 100% the right call. Just like fouling Vince at half court was the right percentage play to get Davidson the absolute greatest number of possessions
R

LQuarles said:
Yep. I'm sure it's because Luka is a fundamental, disciplined Euro guy, and Mo was just a great athlete.
Click to expand...

I was once joking with the head basketball coach of a high school who had won the VA AAA state championship a few years before (when he was a key assistant, which is to say he new his basketball) about how Shack's basic offensive move was an offensive foul. In all seriousness (I was joking) he absolutely agreed with me. Luka reminds me of that. He backs people down leading with shoulders and forearms, just knocking people out of the way. As I read the rules, that's a foul. But he almost never gets called. There are ways of backing people down without literally going through them, most of the time he just goes through them.

Been a while since I have visited, but congrats Rams. I watched most of the game and sweating at the end.

90% sure I will vacation in DC for the A-10 tournament. I stayed in Fairfax four years ago for cost control and took the Metro. Discovered, by accident, a neat buffet place on Lee Hwy with link below. Any other cheap lodging areas/places to note are welcome. 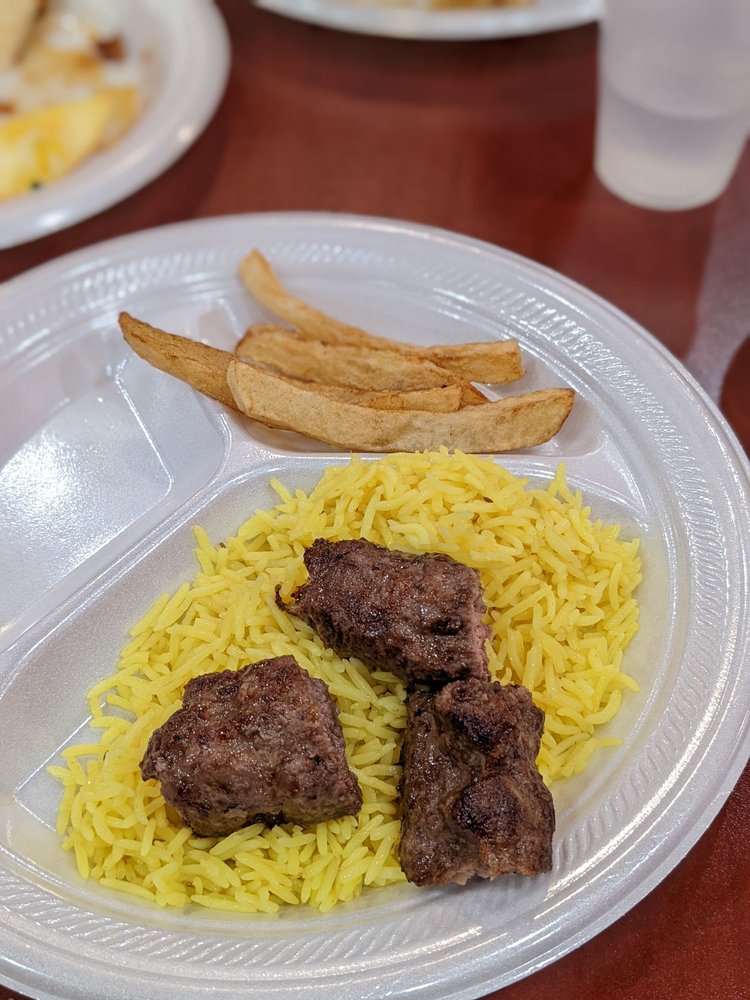 Specialties: All You Can Eat Buffet Kabobs,rices,Salads,Soups,fresh bread,Hummus,all appetizers,deserts and much much more.... All You Can Eat for the price of one plate of Kabob and rice elsewhere. Everything made fresh daily $6.99 per lb Togo Dinner Buffet Established in 1994. Twenty Years...

PS, after the raid of the AAC, I have given up on acquiring schools from the A-10. I like the pick up of Loyola Chicago --- who knows, maybe an even sixteen conference with a four-team Midwest pod can occur if y'all can land Wichita State.

And in seeing the Rubik's Cube with the CAA, I guess there are no lingering regrets for leaving it, right? ;-)

That was an incredible game last night, Great Team Win!

But moving forward, Free Throw Shooting needs to improve, Coach Rut from Benedictine would have his guys shoot a ton after practice.
clock management and ball control/shot selection at the end of games.

The team is playing better but its the little things that win championships.

Wandered over to the Davidson board....saw a lot of gnashing teeth about how the refs screwed THEM at the end

Their reasonable posters all basically said "There were LOTS of reasons we lost, it wasn't just the stuff at the end" and in that I agree

Did Curry hack at Jones a little on that rebound? Yea, maybe a little....Jones never really had possession and it was more of a scrum
Did Luka extend his elbow on Vince??? Yup!!
Did Vince do a little acting?? Also Yup
Did the refs bail out Loyer on that BS 3 point shot with a friggin second on the shot clock?? Yup....and that was a reeeaaal cruddy call

Hope this isn't repeating an established post... but The Chef is cooking (speaking)!

But moving forward, Free Throw Shooting needs to improve, Coach Rut from Benedictine would have his guys shoot a ton after practice.
clock management and ball control/shot selection at the end of games.

The team is playing better but its the little things that win championships.
Click to expand...

Ruuuuuuuuuuuut!
Having him as a teacher was a hoot. He'd lay down tests and immediately get up to leave, mumbling something to the effect of, "now you know the honor code is in effect, I have some tapes to go review."

Coach Rut, Schedule, Smoke a Cigar, he would come back with ten minutes leave in class to see if there were any questions. A great coach and person to chat with after graduating. I don't know how much I really learned in that Algebra II class?
M

Ram20ROB said:
VCU Heel is absolutely spot on. Look at our bench - for most games we have more guys in suits than we have in uniform. 15 guys coaching or assisting. Each team always has one guy who usually goes to the scorer's table every timeout to check fouls and timeouts. With so many people on our bench "helping out" how is it that Davidson and the refs knew they had a timeout and we didn't? We got away with it last night but I hope we learned something for the future.
Click to expand...

Many of the suits are empty.
I

CrozetRam said:
Curry was spectacular tonight. Lock down defense. 8 points on 4-4 shooting. One measly turnover and really no crazy spinning recklessness. Three assists. Four rebounds. Hard to overstate how much that means if he can be that guy consistently.
Click to expand...

Don’t forget Nunn on Loyer. guy can score. Nunn just blanketed him. Our guys can be lock down.
if Curry had a 3point shot……

Ramdog said:
actually their act reminds me of the scene in Rocky where he and Creed were jumping and hugging in the surf ...little cringe worthy.
Click to expand...

Most awkward scene in all of American cinema.

RAMTKE said:
Coach Rut, Schedule, Smoke a Cigar, he would come back with ten minutes leave in class to see if there were any questions. A great coach and person to chat with after graduating. I don't know how much I really learned in that Algebra II class?
Click to expand...

Yup. He’d have a freshman (used to be one of the VCU sports medicine doctors) review our homework while he went to his office to read the paper and BS with Buster and Coach Crowder. Those were the days.