On Monday, Dykstra inked a contract to rejoin Major League Soccer, this time with the D.C. United, located not far from his hometown of Woodbridge, Va. He will join the team for preseason training immediately.

Most recently, Dykstra traveled through Europe, exploring professional opportunities in the United Kingdom. When offered a deal with the Major League Soccer team in DC, the Woodbridge, Va. native decided it was time to return home.

"It has taken some time working through negotiations and feeling out my options, but I feel like this was the best move for me," he said. "I was told before my Euro excursion that I was welcome back to DC if it did not work out the way I hoped."

RICHMOND, Va. - The VCU men's soccer team isn't waiting for the fall to be challenged, as VCU Men's Head Soccer Coach Dave Giffard announced his 2012 spring schedule, that will test the players both physically and mentally.

The Rams spring schedule features 11 games, including five games against NCAA Tournament teams from 2011 and a local derby match against the Richmond Kickers of the USL Pro League.

"Everyone involved with VCU Men's Soccer is excited about the spring schedule," added Giffard. "We are challenging ourselves with the best competition that we can find to help us continue to develop and evaluate our growth. Since the end of our fall season, there has been a hunger and determination within this group of players that has been very encouraging. Right now, we have 26 student-athletes who are fighting to get better every day; this type of schedule will allow our players to show what they can do as they will be tested each time they step on the field."

RAMS TAKE DOWN LONGWOOD AND RICHMOND KICKERS IN SPRING MATCHES

RICHMOND, Va. – The VCU Men's Soccer team kicked off its 2012 spring schedule with a pair of matches on Saturday, squaring off against Longwood University and the Richmond Kickers of the USL Pro League.

The Rams won both matches, taking down Longwood 1-0 in a morning match at Sports Backers, before making the short trek to Ukrop Park for the 2-1 takedown of the Kickers in the evening. The Black & Gold used two different sets of lineups for the two matches (see below for both lineups).

"Today was a good first day of games," said VCU head coach Dave Giffard, who is heading into his third season at VCU. "Both teams (that we used) had a lot of positives and some areas that we need to improve. We'll get back to work and start getting ready for Friday's game with Maryland."

In the morning game against Longwood, midfielder Devon Fisher scored the game's only goal off an assist from forward Daniel Haehre. Goalkeeper Clark Hankins started the game in-between the pipes for the Black & Gold, before being spelled by Garrett Cyprus at the half.

In the evening match versus the Richmond Kickers, forward Jason Johnson delivered a pair of goals to earn the Rams the victory. Johnson's first goal was assisted by midfielder Mario Herrera Meraz, with the second goal coming off an assist from forward Yoram Mwila. Goalkeeper Andrew Wells started in goal for the Rams, playing 70 minutes before being replaced by Hankins for the last 20 minutes.

The VCU Men's Soccer team added a pair of victories to its spring campaign, defeating visiting VMI and Wake Forest in a pair of matches played on Saturday at Sports Backers Stadium.

"It was nice to get two results today against two good teams in VMI and Wake Forest," said VCU head coach Dave Giffard. "I thought today we were further along than we were two weeks ago against Maryland, but not where we need to be yet. I was proud of our guys for finding a way to win the game tonight (against Wake) after going down a goal. We are at the point in our development as a team where we have to go into games against good teams expecting to win and then doing the little things that are necessary to get results against those good teams."

ROCK HILL, S.C. – The VCU Men's Soccer team continued its spring schedule on Saturday, traveling to South Carolina for a trio of games.
The Rams fell to Queens College 2-1 in the day's first game, before suffering a 4-3 setback to Davidson in the second match. VCU earned a 1-1 draw with Furman to close out play at the event.
"I thought we took a big step backwards today after several positive steps throughout the spring," said VCU head coach Dave Giffard. "We scheduled today's tournament to challenge ourselves against good competition. Obviously we weren't pleased with the results. You can make excuses and talk about the travel, the lack of sleep or the fact that we played three games and the other teams just played two, but those are just excuses. At the end of it, we have to be more mature and professional in our approach each and every time we pull on the uniform. I was very disappointed that we didn't get three wins today, although based on our performance, I don't think we deserved them. We'll learn from today and get back work this week as we prepare for our last games of the spring against Virginia and Liberty on April 14th."

Looks like Dykstra will be loaned to Charleston for two games (Giving him a game against the Richmond Kickers).+

SIX NEWCOMERS SET TO JOIN RAMS IN FALL OF 2012

RICHMOND, Va. – With only three players graduating from last year's VCU men's soccer team, the coaching staff had specific areas that they were looking to address entering the fall of 2012.
"With only a few guys leaving from last year's team, we were focused on adding a very small but talented group of student-athletes to our program for 2012," Head Coach Dave Giffard said. "Most importantly, we wanted to make sure that we added the right type of people to what is already a very talented group."
Giffard and his staff believe they have done just that with the six newcomers that will be joining the Black & Gold this fall.
Joining the Rams this fall will be defenders Dennis Castillo (San Jose, Costa Rica) and Adam Hamdan (Leesburg, Va.), forwards K.C. Onyeador (Sterling, Va.) and Matt Friebaum (Frederick, Md.), midfielder Dakota Barnathan (Massapequa, N.Y.), and goalkeeper Richie Ongaro (Columbus, N.J.).

KEITA NAMED TO PDL NATIONAL TEAM OF THE WEEK

FULL PDL TEAM OF THE WEEK (http://www.uslsoccer.com/home/631875.html )
TAMPA, Fla. – Most college students spend the first few weeks of summer trying to relax and catch up with some old friends.

Rising sophomore Assane Keita of the VCU men's soccer team is not in the majority as he has spent that time working on his skills with the Fredericksburg Hot Spur of the PDL League. His hard work paid off with a spot on the PDL National Team of the Week.

The PDL is made up of over 70 squads across North America, playing in nine different divisions, featuring some of the best young players across the continent.

The Rams' new 2012 slate features nine home matches, including early season meetings against Big East foes Villanova (Sept. 2) and Pittsburgh (Sept. 9), as well as a road game at SEC member Tennessee (Aug. 26). In all, VCU will face four teams that participated in the NCAA Tournament in 2011, two of which are Atlantic 10 opponents.

After an exhibition match at UAB on Aug. 18, the Rams will kick-off the 2012 campaign with their annual VCU Invitational. The Black and Gold will host Bucknell on Aug. 24 at 7:30 p.m., and then conclude the tournament with a Sunday matinee against old CAA foe William & Mary on Aug. 26.
VCU will then hit the road for six straight road matches. The Black and Gold begin the trip with two road contests against UMBC on Aug. 30 and Navy on Sept 1.
The Rams then take on Winthrop Sept. 7 and Seton Hall on Sept. 9 as part of Old Dominion's Stihl Classic, before invading the Sunshine state the following weekend to play against host Florida Gulf Coast on Sept. 14. The squad will then travel to Harrisonburg to take on the Dukes of James Madison Sept. 18.
One of VCU's final non-conference tests may be its biggest, as the Rams welcome national power Virginia to Sports Backers Stadium on Sept. 25 for the first time since 2008. The in-state rivalry is scheduled to kickoff at 7 p.m. VCU then wraps up non-conference play with a home match against Northeastern on Sept. 29.
VCU begins its new A-10 era at home against 2011 National Runner-up Charlotte on Oct. 5, and will also host George Washington (Oct. 7), while traveling to St. Louis (Oct. 12), Butler (Oct. 14), Fordham (Oct. 19) and La Salle (Oct. 21).
VCU's home conference slate will continue Oct. 26 when the Rams play host to Xavier, and then Dayton (Oct. 28). The Black and Gold is also scheduled to have an away match against hometown and new A-10 rival Richmond (Nov. 2).
VCU continues to make strides under Giffard, who is entering his third season.

RICHMOND, Va. – Ordinary, boring, unmotivated. Those are words that have never been used to describe Lauryn Hutchinson, a rising senior on the VCU women's soccer team.

Anyone who has ever met Hutchinson has seen the passion and eccentricity that makes the Sterling, Va. native who she is today. Those are the reasons why her old high school, Dominion, called on her to be one of the speakers at their 2012 Senior Seminar back in May.

Rising junior midfielder Jose Carlos Castillo has signed a professional contract with Mexican club Jaguares de Chiapas, a member of Mexico's Primera Division, which is the top-level pro league in the country and arguably the top league in North and Central America.
http://www.vcuathletics.com/sports/msoc/2012-13/releases/20120706x66i06

Chiapas is right next to Guatemala, Castillo should be right at home. Fun fact, Chiapas doesn't have player names on the back of the jersey, they have the players twitter handle.

Jwetzel said:
Chiapas doesn't have player names on the back of the jersey, they have the players twitter handle.
Click to expand... 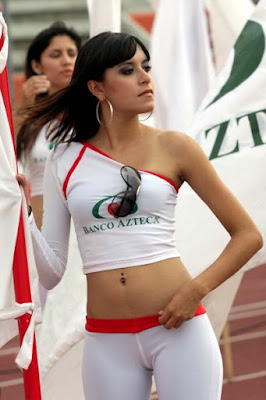