DisplacedRam said:
I don't know about ya'll but I sure could go for a Miami Heat Vince Williams Jr. jersey!
Click to expand...

If it were to happen I wouldn't be mad... since the Heat are my favorite team.

Follow the insta link and see the Ram support he has...

MobileMunchies said:
Follow the insta link and see the Ram support he has...

This is the vibe that leads to Vince dunking in someone's face. I like this energy!

Glad Vince got onto the actual first team. The media awards are a minor joke, as most of the people voting are bloggers and podcasters rather than actual journalists. Here's the list of who is voting for those awards. Also, on a related note, I have managed to secure a vote on these for next year for the podcast I produce, Rams Rewind. Perhaps that will help fix some of the inequities.

Stocks are steals plus blocks. For reference, I believe the current leader in the NBA this season is Jarren Jackson, who averages 3.1 stocks per game. 2 is an elite number. 3 is the elite of the elite. 4 is people like Hakeem and Kareem.
Last edited: Mar 9, 2022

mrgeode said:
Stocks are steals plus blocks. For reference, I believe the current leader in the NBA this season is Jarren Jackson, who averages 2.21 stocks per game. 2 is an elite number. 3 is the elite of the elite. 4 is people like Hakeem and Kareem.
Click to expand...

2.21 seems very low for the NBA leader if it’s steals plus blocks.

You're right - I was looking at the wrong data set. Jackson is at 3.1 per game. I thought it seemed low but zeroed in on the wrong column even after I checked my math. 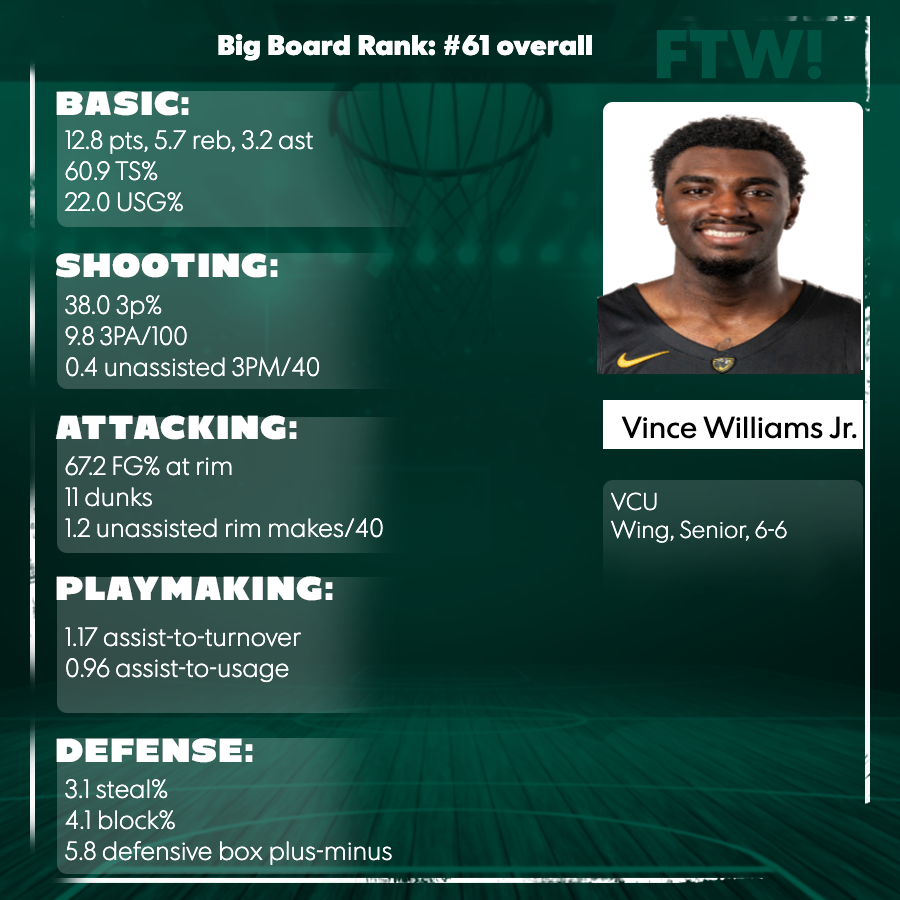 PLAYER SPOTLIGHT: Vince Williams Jr.
VCU’s Vince Williams is an elite defensive prospect. In fact, opponents are shooting just 4-for-27 (14.8%) on jumpers off the dribble when Williams is the nearest defender, per Synergy.
Among top-100 teams, via KenPom, none are forcing turnovers more often than VCU. He is one of just a few players with a steal percentage above 3.0 percent and a block percentage above 4.0 percent. When you consider both his willingness as a shooter and as a playmaker as well, he joins especially elite company.
Overall, his team has outscored opponents by 15.1 points per 100 when Williams is on the court, per Pivot Analysis, but they are outscored by 9.3 points per 100 when he is off. With a reported wingspan near 7-foot, if there is anyone in this class who may resemble Pelicans rookie Herbert Jones, it is Williams. I expect that he, too, will continue to rise in the pre-draft process.

So does anyone have a read on the odds of Vince sticking around for another year?

Ram Jam said:
So does anyone have a read on the odds of Vince sticking around for another year?
Click to expand...

It's probably a toss-up either way. I think MBJ and Tsohonis transferring and opening up scholarship spots might make it a bit more likely though.
H

I’ve been racking my brain for weeks now for a good comp for Vince and it finally hit me, Joe Ingles! Joe is a little taller but Vince probably makes up that difference with his length. I could see him having a similar impact and career as Joe.
You must log in or register to reply here.
Share:
Facebook Twitter Reddit Email Share Link
Top